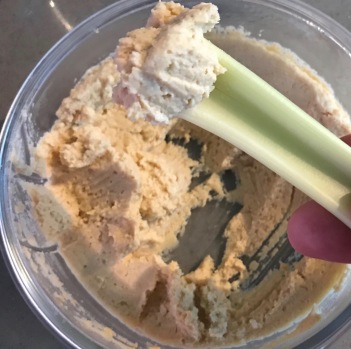 I was at a big city gym the other day, on a pass, just because I like to work out when I am out of town and in a place bigger than here. I love to see what the other places have to offer, especially big hotels and resort gyms that have great new equipment that is deeply underused. But this place was well used and appreciated by the local population I am sure.

I was eaves dropping on two older women sharing recipes and dinner party ideas, when I heard one of them say, “how do you know if a person is a vegan,” to which she quickly gave the answer, “they’ll tell you.” So I piped up, “I’m a vegan!” as a joke. I told them. I hope they took it as a joke, although I am a vegan. Anyway I am offering some hard earned words of wisdom here to my vegan friends, but non-vegans are welcome to read on.

Recently I have been asked to couple of omnivore dinners and cocktail parties, and after the invitation is extended the host/ hostess conveys some panic as to what to serve me, and I then offer to bring something or anything, but I am reassured that no, they have it under control, after all.

I usually appear, hopeful, with a bottle of wine, and am offered a glass of wine and shown to the hors d’oeuvres in the dining room or kitchen island around which everyone is seated or standing. I scope the landscape of cheeses, meats, fried cheese and fried meat, battered cheese and meat, and some bowls of mayo, sour cream and cheesie type dips, to see a lone plate of crudites and beside it a bowl of trail mix. Who in their right mind wants trail mix with their wine? I might love it on a canoe trip under the stars, shivering and thanking the universe I haven’t been eaten by a bear. Am I to crunch my way through the evening, trying to stay sober on carrot sticks and bird seed? Did my host not say they had it under control? What temporary amnesia hit?

What I am trying to say is where is the guacamole? You just mush up some ripe avocados don’t you? Surely they’ve been to Mexico, or failing that, a Mexican restaurant? And where is the hummus? Chick peas and sesame butter (tahini) for heaven’s sake. You don’t need a recipe. You just have to live in Canada. You can even buy this stuff pre-made. (I did have a hostess put yogurt in her hummus once, for some odd reason. Panic had set it, I imagine.)

Anyway when they assure you that they have it under control, don’t believe them. Make some stuff and put it in the car. Make hummus. Make guacamole. I made a lentil and sauteed onion dip the other day, easy. I made a beet and soaked cashew dip. You can make dips out of a whole lot of stuff, artichokes and white beans and whatever is next on my list. Buy some fake cheese too, from The fauxmagerie or Nuts for Cheese both available at major supermarket chains.

Go to the party fully armed with dips, cheese, Mary’s Crackers and have a blast. If you’re worried about a main course, stash a bean salad flavoured with cilantro and red onion and a lemon vinagrette in the back seat. Dessert? A fake Daiya cheese cake–it can’t be any less healthy than a real one, and you don’t eat the damn things every day anyway or you shouldn’t. If they ask how you get your protein (you poor soul), because everyone will because everyone’s mother did, show them what you just brought, there is more than enough protein for everyone there. You won’t die in the next ten minutes, you’re muscles won’t fall off, your hair and nails and organs won’t shut down. You had wine for god sakes!

Go forth, eat, drink, be merry and don’t gamble on the words of your host or hostess that they have everything under control.

One thought on “For My Vegan Friends”